[This is the first of several “Sidebar” topics relating to MEGA that I plan to share with you, so please stop by often.]

The MEGA line, which is actually part of a network of lines in the area, seems to imply that the Cuban site may have been part of a much larger complex. Could the lines be ancient highways or are they merely naturally occurring faults in the seabed?

After my first visit to the Satellite Discoveries site, I decided to look into Andros Island and I turned up some interesting facts. Along with being just inside the accepted boundary of the Bermuda Triangle, Andros is the largest island in the Bahamas and it’s covered with thick, impenetrable bush. In fact, its 2,300 square miles may be the largest unexplored area in the Western Hemisphere. On the eastern side of the island is the Andros Barrier Reef, the third largest in the world. The reef rims an area called the Tongue of the Ocean, with its 6,000-foot drop off. The Andros area is also the site of numerous blue holes – extremely deep underwater cave systems.

But Andros Island, with its population of some 10,000 full-time residents, is also the home of another interesting site. In a remote area along the coast of Andros is the Atlantic Undersea Test and EvaluationCenter– AUTEC – the Navy’s version of Area 51! Be advised that the AUTEC Website is located on a DOD computer and traffic to and from the site is monitored.

Andros Island is just one of the many interesting MEGA connections – stay tuned for more in upcoming Sidebars!

Line from Cuba to Andros 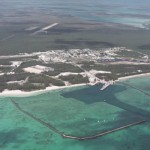 I recently read a comment on another blog in which one poster admonished another by saying, “If you’d spend more time in the library and less time online, maybe you’d have your facts correct!” While I’m the first to agree that anything can – and does – get “published” on the Web, I’m not willing to accept a statement as true just because it’s bound in black and white, either. And what if there aren’t any traditional books on a subject, such as MEGA?

Obviously, the best way to obtain information about MEGA is to interview those that have first-hand knowledge of the place. So far, I haven’t had that opportunity, so I tend to look to articles by authors who have conducted interviews. My favorite resources are those that provide direct quotes by Ms. Zelitsky, Mr. Weinzweig or Sr. Iturralde, all individuals who have been on-site and studied the available evidence. As far as I know, none of them have published their own authoritative documents on MEGA, but studying the text of their interviews gives you at least a glimpse at the truth. Here’s my “A” list, in no particular order:

Fernandez, Luis Mariano. Atlantis in Cuba? An Interview with Zelitsky and Iturralde on 3/26/2005 (2005). English (translated) version at http://www.s8int.com/water28.html. This is the most current information I’ve found so far. Also see this site’s pages at /water1.html, /water19.html, /water20.html, /water23.html, /water27.html and /water28.html for additional articles on MEGA written by various authors.

Collins, Andrew. ‘Lost City’ Found off Cuba – Is it Proof of Atlantis? (Undated).
http://www.andrewcollins.com/page/articles/lostcity.htm. See the last two lines of the article.

I’ve compiled a lengthy list of other articles about MEGA and its discoverers and my research continues every day. If you Google Zelitsky, you’ll get more than 600 hits and most of them reference Paulina Zelitsky, the head of the research team that made the original discovery. Sadly, many of the hits contain the exact same content because the practice of “borrowing” another’s intellectual material seems to be the norm on the Web. Other articles are nothing more than paraphrased versions of the originals. It seems that back in the 2001-2002 timeframe, when the discovery was first announced, everybody wanted to get on the MEGA bandwagon.

Maybe someday the phone will ring and when I answer I will hear Ms. Zelitsky say, “I’ve been following your blog and I’d really appreciate it if you would fly down and become our staff writer.” Until then, my search for additional credible information goes on … and on … and on.