In a recent email, blog member Ron Smith suggested that my Sea Level Rise chart in the previous post doesn’t take into account the Younger Dryas interval, so I did some digging and I believe he’s correct. Here’s what I learned:

The Younger Dryas interval was an unusually cold period that interrupted the last deglaciaction. As the glaciers began to melt, the temperature of the earth – and the levels of the seas – began to rise as well. But something happened about 12,800 years ago that reversed this trend for more than a thousand years. Then, as quickly as it had come, the Younger Dryas event ended and temperatures in northern hemisphere rose by as much as ten degrees Centigrade in ten years! Compared to the current global warming trend of less than one degree per hundred years, the YD interval was a catastrophe of major proportions.

The exact timing of the Younger Dryas interval has a fairly wide margin of error, but evidence of its occurrence comes from a number of sources, including glacial deposits, tropical and polar ice caps, pollens, lake and marine sediments, tree rings, corals and speleothems. Furthermore, evidence appears from Greenland to China, indicating that this was not just a regional problem.

There’s a lot of speculation about what might have initiated the cold snap, but one explanation I ran across frequently was a meteor impact in the area of theGreat Lakes. This could have caused an extraordinary amount of fresh water to be released through the St. Lawrence valley and into the North Atlantic which, in turn, disrupted the thermohaline circulation of the Earth’s oceans and produced global climate changes.

The graph below depicts the rate of sea level rise (not the actual depth) in centimeters per century over the past 20,000 years. Except for just the last few years (extreme right side), the seas have been experiencing a nearly constant and very gradual rise since about 1,000 B.C. Compare that to the dramatic events of the two most recent “spikes” and you begin to understand how ancient civilizations could have literally disappeared off the face of the earth.

For more information on Younger Dryas I suggest:

I’m still looking for a direct sea-level vs. year chart that takes into account the Younger Dryas interval. If you know where I can find one, please drop me a line. 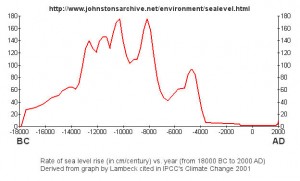