For a couple of weeks now, various media outlets have been running a story about the Yonaguni monument based on information from Masaaki Kimura, a professor at Ryukyu University. Kimura claims to be “on the verge” of proving that the underwater megalithic feature was the foundation of a castle built in the middle of a city that was sunk by an earthquake 3,000 years ago. That would make the site at least 7,000 years newer than previously thought! The new theory first appeared on the Reuters News Service HERE but let’s examine what we really know about Yonaguni.

First of all, the underwater feature was actually discovered by Kihachiro Aratake, a local dive operator who was scouting for new sites. This fact is overlooked in every one of the recent articles I’ve read, which credit the discovery to “scuba diving tourists.” Aratake was – and still is – a dive operator on Yonaguni Island and he made his amazing discovery in 1985, 1986, 1987 or 1988, depending which source you read. Even Graham Hancock cites two different years: 1987 in Heaven’s Mirror (Three Rivers Press, 1998) and 1986 in Underworld (Crown Publishers, 2002). Regardless of the exact year, Dive Master Aratake deserves a nod anytime the Yonaguni monument is mentioned.

According to the most recent version of his findings, Professor Kimura now believes that the Yonaguni megalith was once part of a castle in the center of a city that also included a castle, a shrine, an arch, statues and a coliseum. “Judging by the design and disposition of the ruins,” he is quoted as saying, “the city must have looked just like an ancient Roman city. I can envisage a triumphal arch-like statue stood on the left side of the Coliseum and a shrine over the hill.” Kimura claims the city was sunk by an earthquake 3,000 years ago. At least that’s what he says today. Remember that the megalith was at the center of a city that was destroyed by an earthquake – we’ll come back to this later.

In 2002, Kimura was interviewed by Morien Institute through a series of emailed questions and answers. You can read the entire article HERE but the last two questions warrant some discussion.

When asked about evidence that the Yonaguni monument was once above sea level, Kimura responded, “When it comes to evidence that Iseki Point [the site of the monument] was once well above sea-level, the Yonaguni ‘sea-floor stalactite cavern‘ has been studied by me with scientific methods and now put this fact beyond dispute.”

When asked about the age of the monument, he replied, “After studying the No 1 monument at Yonaguni for more than 10 years, the structure may have been manufactured in the dry air about 10 thousand years ago based on such evidence as age determinations of the stalactite in the underwater caverns, and of the No.1 monument using 14C and 10Be methods.” [14c and 10Be are scientific dating methods and Kimura mentions the ten thousand year age several times during the interview]

Before reading on, you might want to check out the underwater site for yourself. A Google search for the exact phrase “Yonaguni photos” yields 62 hits and many of the pictures posted on the Internet are remarkable.  Below this post are some photographs that you should check out before continuing.

Now that you’ve seen the site first-hand (well, technically, second-hand) I remind you of Kimura’s claim that the structure was once at the center of a city that was sunk by an earthquake. Did you see, in a single photograph, the kind of rubble you would expect to find if an entire city had been destroyed? Quite the contrary! The smooth, sandy bottom is conspicuously devoid of rocks, boulders and debris. The picture I added to the gallery was taken by professional underwater photographer Danielle Caceres-Bricheno earlier this year (2007) when she explored the site with Aratake and she says, “There is nothing that looks like it was affected by an earth quake at all.” More of her incredible Yonaguni photos are online HERE.

Although I couldn’t find any photographs of the stalactite cavern Kimura claims to have studied, I seriously doubt if the stalactites would have been worthy of much study if they had been through an earthquake large enough to sink an entire city. No, I think Graham Hancock’s original scenario – that the site was submerged by rising sea levels – is much more likely to explain the physical evidence. It also explains the well-preserved stalactite and stalagmite caves of the Bahamas, and the massive complex beneath the island of Cozumel. The real question seems to be why did Kimura revise his thinking and move the submergence of the Yonaguni monument 7,000 years into the future? None of the available interviews (see YouTube interview HERE) mention his “old” theory or ask why he’s changed his mind. However, the new theory certainly fits the academic view of history much better than his old theory did. 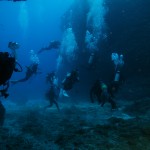 [Footnote: Tsubute, the second novel in my Seeds of Civilization series takes place almost entirely on the island of Yonaguni and suggests an entirely different origin and purpose for the monument, but at least I tell my readers my story is fiction! Et tu, Kimura?]