When I first started this blog, I was very interested in learning more about the reported discovery of an underwater megalithic site off the northwestern tip of Cuba. My objective was to trudge through the many articles, interviews and commentaries and piece together an up-to-date report on the discovery and the discoverers. During my trek, I’ve learned about other recent discoveries throughout the Caribbean that are almost as fascinating as the alleged “lost city of Cuba” so I’ve decided to broaden the scope of this blog. I’m also going to coin a new term to refer to my specific region of interest: MegaAmerica. 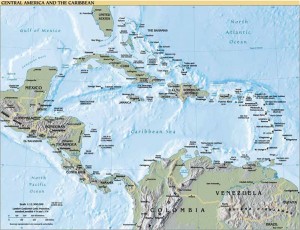 As opposed to Mesoamerica, which generally refers to the terrestrial region that extends roughly from the Tropic of Cancer in central Mexico down through northwestern Costa Rica[1], I’ll use MegaAmerica to refer to the Caribbean Sea, The Gulf of Mexico and all the lands they touch. For good measure, I’ll also throw in all the islands of the Bahamas and theLesser Antilles.

As with Mesoamerica, MegaAmericans will refer to civilizations that existed prior to the arrival of the Spanish, around 1500. This includes the Ciboney (or Siboney), the Taino (or Island Arawak) [see blog entry “Where Are the Artifacts?”] and any groups that preceded them. Specifically, I’ll focus on evidence for a maritime culture capable of building megalithic structures such as those found at Bimini, Andros and (possibly) the “lost city ofCuba” itself.

In blog entries that follow, I’ll examine in more detail the findings and theories of Greg & Lora Little, Bill Donato, George Erikson & Ivar Zapp, Angie Micol and others whose work supports the theory that an ancient maritime civilization once sailed the seas of the Americas. And, of course, I’ll continue to follow the developments of the original MEGA site, if (and when) credible information becomes available.