In my previous blog entry I suggested the term MegaAmerica to refer to the land and sea areas contained within the Caribbean and Gulf basins. I also suggested the term MegaAmericans to refer to the ancient maritime culture(s) that apparently sailed the waters of this region thousands of years before the arrival of the Spanish. This time I’d like to explain why I think this area – and its ancient inhabitants – should have a unique name on a par with the highly advanced cultures of Mexico and Central America.

Geologically, MegaAmerica is unique because it has changed so dramatically in the past 20,000 years. Most sources suggest that the water levels in the area have risen by as much as 125 meters (410 feet) during this time, with most of that change taking place between 20,000 years ago (the last glacial maximum) and about 8,000 years ago (the end of the last ice age). When the water levels were at their lowest, MegaAmerica looked much different than it does today. A great deal more land was exposed and the Caribbean and the Gulf of Mexico were much smaller – and more navigable with primitive canoes and rafts.

The original coastlines of MegaAmerica are now under water and many of them are miles off shore due to the very gradual sea floor slopes in much of the area. A quick glance at the Google Earth image below will give you some idea of how much different the world of the MegaAmericans was. It’s easy to look at the map and envision how much larger the land masses of MegaAmerica were back then. The trip from the Florida Peninsula to South America could have been made mostly by land, with only a few short canoe trips to cross the existing inlets. The Yucatan Peninsula may have touched the Florida Peninsula, transforming the Gulf of Mexico into a large inland lake!

Referring to the image again, imagine where the MegaAmericans would have built their major ports. For example, check out what appears to be a natural “harbor” north-northeast of Cancun. There’s a similar area about 70 miles due south of Pensacola, Florida. That’s where we should be searching for evidence and artifacts of this once-great maritime civilization!

As you study the image, or pan around the region using Google Earth, you’ll find many other sites that look promising. It also appears that in ancient times the shortest land portage from the Pacific to the Caribbean wasn’t in Panama, but was a few hundred miles west and north, in what is now Costa Rica. This is consistent with the theories of Ivar Zapp and George Erikson who suggest that the giant megalithic spheres of Costa Rica were actually used in the teaching of maritime navigation. Their book, Atlantis in America (ISBN 0-932813-52-6, Adventures Unlimited Press, 1998), is subtitled “Navigators of the Ancient World” and should be in the library of anyone who’s interested in what REALLY happened in ancient MegaAmerica! 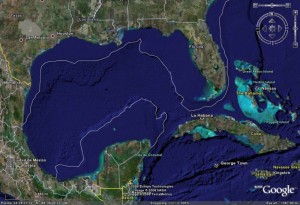