As you’ve probably noticed by the links in the upper right margin of this blog’s home page, I’m also the author of a series of mystery adventure novels called the Seeds of Civilization. The stories are loosely based on Graham Hancock’s ancient/lost civilization theory and each novel uses a different unsolved archaeological mystery as its backdrop. One of my main writing goals has been to blend fact and fiction together so seamlessly that the reader loses track of when the switch occurs. I started writing the series several years ago, long before this blog was conceived, but the two seem to be converging this summer. You see, about the time I started the third book, (tentatively titled Triangle) I had just stumbled onto a report about the 2000 discovery of the “lost city of Cuba” by Paulina Zelitsky and her crew off the NW tip of Cuba. MEGA, as it was being called, seemed like the perfect story backdrop, even though it posed some difficult technical challenges for my characters due to its 2,100-foot depth. 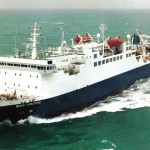 In my writing, the background research is half the fun, and Triangle has been no exception. The search for a technology that would get my characters down to MEGA led me to the Web site of Global Marine Systems, a British company that installs and maintains trans-oceanic communications cables. Many of Global’s ships are equipped with sophisticated ROVs (remotely operated vehicles) that are capable of working at depths of 6,000 feet, more than enough to explore the MEGA site. I contacted Global for more information and not only received a thick packet of printed material and a copy of a video that featured the company, but I also received an invitation to visit one of their vessels at its home port of Victoria, BC, Canada! Although the ship that “stars” in Triangle is fictitious, it’s based on my tour of Global’s Wave Venture – a real, working cable maintenance ship capable of exploring MEGA and many other underwater sites.

While the research at MEGA has been stalled for some time now, that didn’t stop my characters from exploring – and eventually unraveling – the mysteries of the site. In fact, that effort makes up the first third of Triangle. After an unpleasant encounter with some “Cubans”, my characters follow a lead (quite literally) from MEGA to the Bahamas where the story will eventually conclude. Much of the factual information for the Bahamas location is coming from the first-hand accounts of Bill Donato and Drs. Greg and Lora Little that you have read right here on the The Mega Blog. Of course, my characters make fictional discoveries and draw fictional conclusions not suggested by either Donato or the Littles, but the parallels are intentionally close. 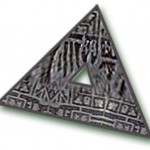 Triangle is expected to be complete by the end of the year, and I’m certainly feeling the pressure to finish before Donato and/or the Little’s announce discoveries that may be even more shocking than the fictional end I have planned for my novel!

Unfortunately, fact moves much slower than fiction in real life. While the technology to conduct underwater archaeology exploration clearly exists, the funding often does not. Much of the research described in The Mega Blog is self-funded or funded by small private donations to 501-c organizations. If you would like to help out financially, please send an email to me at rja (at) TheMegaBlog.com and I’ll pass your contact information along to the researcher or organization of your choice. I can not provide you with their contact info, so please don’t ask.